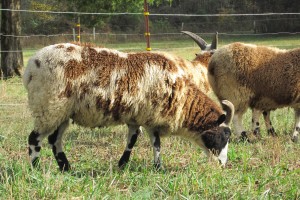 The sheep’s predators and protection: Domesticated sheep are rather helpless because for many years they have been bred to depend upon humans.  Because sheep were some of the first animals to be domesticated, they need constant care and attention.  They are less vulnerable with a guardian animal, such as a dog, llama, or donkey.  When a predator appears, the sheep will run because their only protection is in their speed. If in a corral, they might smother each other in their madness to get away.  In southern North America, their main predator is the coyote but other predators include stray dogs, foxes, bobcats, and eagles.  Sometimes sheep will simply wander away from the shepherd and be killed by a predator.  Most of the time, a shepherd’s whole livelihood comes from his sheep.

Orphans: Orphan lambs, or “bum lambs” as they are often called, can be bottle fed but that is a time-consuming business.  What would be best for you and the lamb would be to have a ewe who’s lamb has died take care of it.  A ewe knows her lamb by its scent, so a shepherd may sprinkle perfumed powder on the ewe and lamb, until she adopts it.  Another way to trick a ewe into taking an orphaned lamb is to skin her dead lamb and place the pelt on the orphan.  You should be careful when working with orphans though, because if the ewe does not accept the lamb she might trample it!

Homing and flocking: Sheep have a strong homing instinct which means that they will return to the farm that is their home, following those who know the way.  They also have flocking instinct, which means they stay in a tight herd, and if one sheep runs: they all do!  This can be helpful (or not helpful) if you are a shepherd.

Sheep, as a job: Shepherding is one of the hardest jobs you can have because it takes a lot of time.  The shepherd is with the sheep all the time day and night.  You don’t just work eight hours a day and then stop!  It is also hard because sheep are so helpless.  Yet, keeping sheep is rewarding: most of the time, a shepherd’s whole livelihood comes from his sheep.  Take care of the sheep and they will take care of you.

The Good Shepherd: In the Bible, Jesus in sometimes described as the Good Shepherd, and Christians as His sheep.  We do truly have many similarities to sheep, such as helplessness and wandering away from the Shepherd.  One of the most famous passages in the Bible is written by David Psalm 23 states “The Lord is my shepherd; I shall not want. He maketh me to lie down in green pastures: he leadeth me beside the still waters.  He restoreth my soul: he leadeth me in the paths of righteousness for his name’s sake.  Yea, though I walk through the valley of the shadow of death, I will fear no evil: for thou art with me; thy rod and thy staff they comfort me.  Thou preparest a table before me in the presence of mine enemies: thou anointest my head with oil; my cup runneth over.   Surely goodness and mercy shall follow me all the days of my life: and I will dwell in the house of the Lord for ever.” In this psalm, David is speaking as a sheep and calling God the Shepherd.  Learning about sheep helps you to learn about yourself.